I received a message through my Facebook account. I quickly scanned the note recalling only the key words: “August 15. 11:00AM. Diamond Hotel. Sorry if it seems last minute. “ I stalled. Though I only have roughly two days to prepare, I couldn’t, rather, wouldn’t say no. It is for the world’s longest running musical, after all.

I waited for more than 30 minutes in the lobby. The mix of anxiety and excitement brought me to the hotel way ahead of the scheduled time hoping that stepping foot in the venue would lessen the tension. I was wrong. What was I thinking? The moment I started waiting, my heart beat escalates. I could barely keep myself still. Every second, I checked the clock in my mobile phone.

I met with my friend Kate, the person who sent me the note. Together, we head to the venue of the press launch.

We were treated to a six course meal with food that I could have never tasted in my life. We were, then, introduced to the leads. After the short Q&A, we went to another are to have a more intimate chat with each cast member.

If a two day notice is enough to shock me, how much more surprise could I have been if I was informed two hours before the event. One day, Kate called me up to invite me to watch the technical dress rehearsal with her. Even before she ended the call, I shrieked and went home running to get dressed.
Just when I thought that surprise was enough, Kate and I were led to the second row of the orchestra section. There have been imperfections in that show since they are adjusting the volume of the microphones earlier in the show.
But I didn’t mind. I hardly noticed the adjustment.

A Balcony Seat and a Glass of Wine

After attending the press preview in CCP’s Tanghalang Nicanor Abelardo, Kate and I were handed tickets for the – show. The seats weren’t as good as where we were the last time but it was the gala night, and the theatre was filled with people in semi-formal to formal wear. I spotted a number of celebrities, paid no attention to them –well, except for Ms. Menchu Lauchengo-Yulo. I adore her.

During the intermission, we stepped out and got some drinks. Kate chatted with fellow writers while I look around. As usual, I am socially awkward and I feel that I don’t belong to places and events like this.

In the Very Core

I’ve been to the heart of the masked phantasm when we were invited to a backstage tour. I actually skipped class for this. Wardrobe, props, sets and even the famous chandelier – we came close to the pieces that help develop the scenes of the well-loved musical. 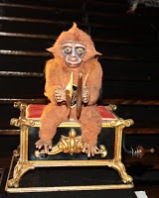 Never did I imagine that my journey could lead to this.

When the run ended last October, I looked back at the experience. All I wanted was to see the show. But I got more than that. The memories of those weeks documenting several facets of the Manila run of the Phantom of the Opera will always be cherished in my heart.

My affair with the opera ghost might be over but the angel of music will continue to sing songs in my head.

Check out Kate’s blog at Kate Was Here.