The Halal Guys has been in the country for over two years but we only had a chance to try them out early this year when they opened a branch in SM Mall of Asia. I haven’t heard much rave reviews but I still want to try it out for my self.

I had the Sampler Platter which consisted of chicken, fish and falafel over rice while my sister ordered the beef gyro. We also had the baklava for dessert.

The gyro tasted like a typical sandwich/wrap. It may be packed with meat and vegetables but it lacked that wow factor that would make me want more.

The baklava was a bit too sweet and dry for my taste. It was nice in the first few bites. But soon after, I felt the sweetness sticking in my throat. I figured, it would be perfect with hot tea.

Overall, I was not too impressed. But I wouldn’t say that the food is bad. Perhaps, I would still try some of their new offerings, if something would pique my interest. 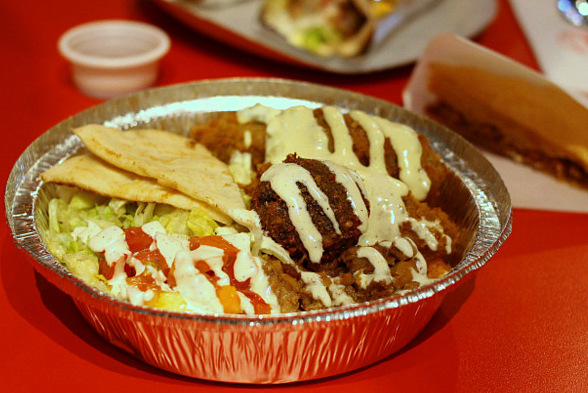 The Halal Guys started as a food cart in New York City serving chicken and gyro over rice to Muslim cab drivers in the city. In addition to serving good halal food, they were made more famous with their sauces.

Now they expanded to a chain restaurant with franchise deals not only around the United States but also in Canada, Indonesia, and the Philippines.

For more updates on The Halal Guys – Philippines, you make check out their Facebook page.