My love for the musical theater dates back to more than a decade ago, when my sister would play the Original Broadway Cast Recording of Miss Saigon from her laptop during her semestral break visits. While I have been a part of my school’s theater group since grade school, I was not that familiar with musicals. When I stayed in a dormitory in Manila during college, my eyes and ears were fully opened to how much I would love this form of art and have learned more about it.

One of the most raved is the musical based on the historical novel by Victor Hugo, Les Miserables. Upon listening to a few songs, I immediately fell in love with On My Own. (I guess, like most people.) After becoming more exposed to the theater, I understand why this musical is among the greats. The complexity and the grandness of the musical numbers can really mesmerize.

When I’ve read news about the Manila production last year, I was excited. My sister and I tried to book earlier tickets but the seats got sold so fast. The only seats left are either too far back or too expensive for our budget. We got tickets for the April 8 show, just in time for my birthday. 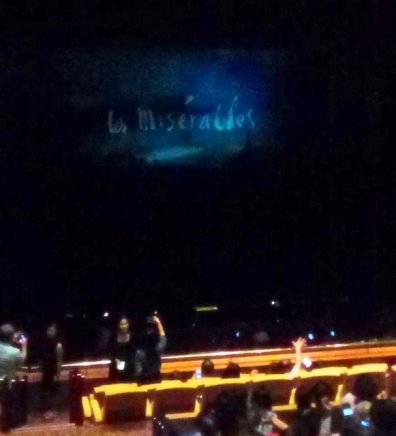 Our seats were on the top most row. We have a good view of the stage although it is small and we forgot our theater glasses.

The whole production did not disappoint. Despite our distance, we still enjoyed the action on stage. I was in awe of the transitions from one scene to another most especially in the death scene of Javert. The stage may be small but it still managed to get my jaw dropped. However, I still wish I can see how grand the whole production can be when it is in a bigger stage like CCP’s Tanghalang Nicanor Abelardo.

Jean Valjean (Simon Gleeson), and Inpector Javert (Earl Carpenter) blew me away. The vocal prowess gave me chills. I love how I can feel the emotions in the songs they sang, something very crucial in the theater especially since not all audience can see their faces.

Much that I admire the vocal skills of the females, I wasn’t as amazed by them as I was with the guys. I have seen a video Rachel Ann Go’s I Dreamed a Dream from a press preview, and I was expecting that much emotion that night. Alas, it felt a bit flat. The power was there but the emotion did not come through. I could say the same with the performance of On My Own by Eponine (Kerrie Anne Greenland). My sister was expecting hugot feels but ended up disappointed.

We really enjoyed the show, however, there are some things that I wanted to point out.

The show started a few minutes late. Also, I wish that there is a recording or some form of notice when the show is about to start. I have watched plays in RCBC, PETA and in CCP and they all have a way of telling the audience how many minutes before the show will start or resume after intermission.

The theater needs to find a way to let the late audience members in without causing much trouble with those who are there on time. Well, to be honest, how each rows are spaced is really a problem in that theater. There is barely enough room to walk.

As for people who want to watch plays, please be mindful of the proper attitude in the theater. Yes, we could hear the people sing. Not from the stage but among us audience members. I think Lea Salonga posted something about theater etiquette recently.

The Manila production of Les Miserables will run until May 1 in Solaire. I’m glad that I am able to watch one of the musical theater classics.